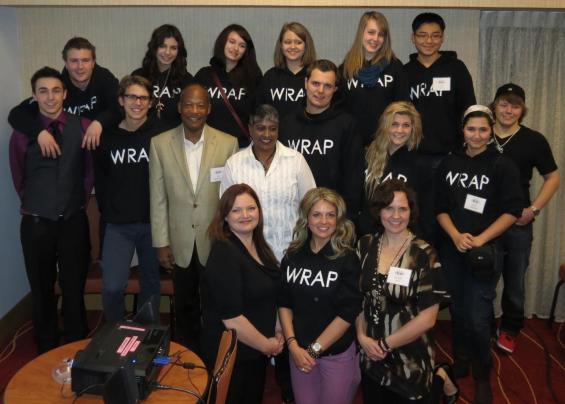 The Copeland Center has been working in Edmonton Alberta Canada on the WRAP infusion into High School project since 2011. This project, which is being done in partnership with Alberta Health Services of Canada, is the first of its kind.  This project is intended to create an environment in high schools where youth can focus on being and staying well, that promote inclusion and self determination, and give youth a set of tools to manage distressing and unforeseeable events.

An enthusiastic group of these high school facilitators, pictured above in Oakland, attended the WRAP Around the World conference and had this to say:

"The WRAP Around the World Conference was an opportunity to recognize the extensive role WRAP plays in our lives. It's a program that has touched the hearts of many, and brought to life a level of wellness that some never dreamed of achieving. The experience was one of a kind and I cherish those memories greatly. The most influential thing I took away from California was the fact that we truly are never alone. I was honoured to be a part of it this year, and I hope to participate for many years to come." - Hailey Maroney, HS WRAP Facilitator

"The WRAP conference was a fantastic experience! Being able to see how our High School WRAP initiative would like to be started in places such as Ireland and Ghana, and that they know what we're doing, is a pretty crazy thought! Overall, I really enjoyed the conference and hope that we get the opportunity to go to next years as well!" - Kaila Twin, HS WRAP Facilitator

"Most experiences can be described in one sentence. However, the WRAP Around the World Conference cannot be described as a single term. I could go on about how inspiring it was, or maybe how powerful a movement WRAP can be. I would rather just say that the conference was simply bewildering. As people, we always hear of movements and great things that happen to individuals around the world. To know of something is one thing, but to be apart of something is much greater. Maturely, I discovered something about WRAP at the conference that I didn't comprehend before... I identified WRAP as a lifestyle more than a program. I remember saying it before but not fully understanding. Overall, the conference was mesmerizing. As 'youth' I am grateful to have WRAP in my life.  Now nothing can stop me from my dreams, and nothing can stop WRAP." - Ross Storoshenko, HS WRAP Facilitator